It is time for another market report from us on developments on the manufacturing market. Since our main manufacturing markets are in Europe, China and India, I will focus on their development. Some months ago we wrote about the implications of Russia's war on Ukraine and please refer to that to refresh your memory here for the previous report.

The worst turbulence in the market seems to have subsided. But it remains unclear how the market will move looking further now.

In Europe where March and April were months of sharp rises in prices and different levels of reshuffling of sources, the worst has calmed down. The initial shock was enormous and caused difficulties. The Baltic countries which have largely relied on Russian or Ukrainian steel had to readjust and other countries in Europe at least saw a shortage of materials and steeply increasing prices.

The European Steel Association (EUROFER) published their report on year 2021 where EU stood for 8,0% of world crude steel production in 2021. At the same time CIS countries (incl. Russia and Ukraine) made up 5,5% of production, which is now largely unavailable. EU and US sanctions have lead to Russian materials dropping out of the western markets, but we can assume that it is looking for alternative markets in countries like India and China, potentially Turkey. The same applies to Russian oil and gas, but building alternative routes takes time and in the mean while there are articles assuming that particularly China is taking advantage of the situation and renegotiating lower prices for Russian energy. 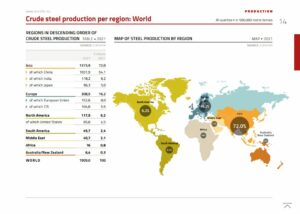 When looking into the future, there is a call from Eurofer to require imports of steel to be controlled for sustainability aspects to ensure that internal and external manufacturers would be on the same line in terms of investments and cost-structures. This would change the steel market by 2030 with a European pledge to reduce emissions by 55% by that year.

The market started finding its balance during May and has remained on a high level but stopped its increase and now shown some careful signs of slight decreases from the highest spot prices. At its worst peak there were spot quotations as high as 2,4EUR/kg for structural steels, which now still have remained on a higher level, closer to 2EUR/kg. There are however some first promising signs that prices will trend lower towards 1,5-1,7 EUR/kg level over the summer, both from Baltics and other Eastern European countries. The availability has also improved markedly.

A major affect has also been seen in the energy prices in EU which have been hit by imposed restrictions on Russian oil and gas. Although there have been signals that the spike has been overcome and gas prices have recently slightly fallen, this will most likely not persist as EU storage is nearing its limits and will not be sufficient to last the higher consumption winter periods in the next period.

Whereas this has been the case in the EU, China has been living in a slightly different reality. China accounted for 54,1% of world crude steel production in 2021, which makes them self-sufficient, and the world fluctuations are less penalizing for the country. Indexes were on a downwards trend from the summer 2021, but saw a peak up after the war started. That peak subsided during April to May and has now returned to pre-war levels. This gives China a clear advantage compared to EU. Most experts we have discussed with have estimated that this price difference will remain for at least another year, unless major market changes occur.

Coke prices took a drastic jump upwards after the war started and rose by 50% in the following months but have since stabilized on a level approximately 20% above pre-war prices.

The energy market in China has not been seeing as big impacts as Europe, but it too faced an upswing after the start of the war. But after rising just over 10%, the prices have remained stable since.

The other major Asian market, India, accounted for 6,2% of world crude steel production in 2021. Indian steel prices saw a drastic jump after the war started to record highs. The peak was however not vastly higher than what was seen in 2021 as well. India has a history of reacting to price peaks by restricting exports of steel and they reacted accordingly also this time, penalizing steel exports with a 15% tax as of May of 2022. This halted the exports and lead to a drop in the steel market prices.

The same has been seen in iron ore and coke prices which peaked during the end of May and start of June and have since dropped by 20%. It is assumed that this would largely be attributed to the export taxes imposed on raw materials.

The Indian manufacturing sector is in the same period doing extremely well. It reported growth of considerable proportions with an increase of 210% y-o-y between Q2 of 2021 and 2022.

The VLSFO (fuel) which spiked up after war started to adjust downwards in April and May made a new jump in June reaching even higher peaks. 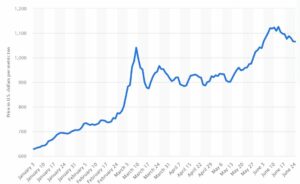 The underlying situation seems to be however that the large shipping lines are using the supply shortages to their advantage, which can be seen in the near obnoxious profits reported by companies like Maersk and Hapag-Lloyd have.

In the meantime, we were seeing a very short-lived decrease in container transport prices in March which carried into April, but this turned upwards again in May and remains on a high level. Still modestly lower than the record highs experienced during Christmas and CNY periods, but still far above what was the norm for the past 5 years prior to the pandemic.

The transit times from Asia to Europe still remain instable and cause unexpected delays, the congestion is handfast in European ports and delays of 1-3 weeks are normal at the moment.

With the current market situation, it is unlikely that we would see a significant decrease in transport prices in the near months.

With the world facing inflation rates not seen since the 1970’s, governments are looking to find new ways to curb the price increases.

The central banks in the US, EU and Sweden have already increased their interest rates. The FED’s increases were of the caliber that the US dollar has seen significant increases in value, weakening the euro and improving EU’s export looks.

The EUR/USD has weakened from start of the years 1,12 to under 1,05 now. Market analysts are already hinting that parity might be reached in the second half of the year, but this will depend on economic outlooks, interest rates and the war will surely continue to pose its threats on the economy.

Salaries in Baltics have jumped to offset some of the implications of inflation. As the inflation rate and salary adjustments in Finland have been lower, cost benefit has slightly decreased. The same situation has been seen in many other emerging European countries.

China’s salary costs have continued their rather stable average increase level of around 10% per annum. While Europe now has jumped to the same level, it is foreseeable that China’s competitiveness remains on a largely stable level.

The Indian labor costs have been reasonably stable rising over each year, but still remaining far below comparable rates in China or Europe.