Combi Works Insights – Is the manufacturing industry heading into a crisis before 2022?

The pandemic has caused an ongoing roller coaster ride for 18 months now. It started with delays and disruption in 2020 and turned to off the rails raw material and transport price increases, not to mention never before seen container transport difficulties.

Even though manufacturing has been quite lightly affected as compared to heavily service-related businesses, the time has been far from easy. When Covid hit, supply chains were severely hit, and delivery disruptions became every day issues. When we got out and expected a calmer 2021, industry had to brace itself for a new surprise.

Transports from Asia – containers in the wrong end

In the second half of 2020 the market started waking up globally and after order intakes in industry had been lower after the outbreak and product and component stocks had been reduced to a bare minimum across industries, the end of 2020 started seeing movement in the opposite direction. Suddenly core components were scarce, and industry had to make up for both manufacturing towards a bull market with strong growth and replenishing low stocks across all markets. We went from a weak market to an extra hot market within very short time.

There is now a lot of market uncertainty and pressure mounts from several directions. In our line of business, we have seen raw material prices nearly doubling and transport prices soaring to never before seen heights. When a container transport from Asia to Northern Europe before the pandemic would cost around USD 2000, we can now at the end of July see prices surpassing USD 10.000. This is a five-fold increase.
And even at prices like this, there is no certainty whether to get container slots or if they would be canceled last minute. The shipping companies are taking full advantage of the disbalance and choosing its customers. Such a situation cannot last forever, but already the duration has exceeded expectations.

In May it was reported by Financial Times that the price of a 40-foot container from Asia to Northern Europe had risen from $2,000 to $9,000, while CNBC reported that the cost of goods transported from Asia to the West Coast of America had increased by 145 percent.

Hoshik Shin wrote in Forbes that “At the heart of this issue is the imbalance of global trade, which has been amplified as a result of the pandemic. With China’s trade economy recovering at a rapid rate and an influx in demand for products the shortage of containers and soaring freight rates are expected to continue through the first half of 2021. With the country rebounding from months of suspended trade, this has created an imbalance – exporting approximately three containers for every one imported.
It’s estimated that there are more than 170 million shipping containers across the globe, used to transport around 90% of the world's goods. “ The same trends were shown in a piece by Farmprogress related to transports to the US.

The pandemic caused congestion and backlogs in ports due to labor shortages, reduced capacity in logistics systems and the effects pile up. There aren’t enough available containers in China or India to meet demand. And unexpected delays or even no-shows from ships occur when shipping lines change their plans. And as traders and factories are bidding higher and higher prices to meet their shipping demands, shipping lines are taking advantage of the situation.

There are at the same time no clear indications of the market slowing down to a level that would rapidly decrease raw material prices. The stock replenishing will continue in the short term after which we estimate that material prices will start easing down. For the time being the overall market despite the on-going fourth waves of Covid seem to be strong which indicates that raw material prices will most likely balance down but remain on a significantly higher level than in 2020. According to a white paper by Mauricio Bragnani and Lorenc Xhaferraj there are four major trends driving this development in the UK which are common to the EU as well:

• Additional non-tariff costs related to the new UK customs arrangements with the EU are adding to the cost of imported raw materials into the UK from Europe.

The shipping container shortfall is also not showing any indication of improving any time soon. According to John O’Callaghan, global head of marketing and operations at Triton, there is a persistent shortfall in container production which is seen in transports, “Despite the factories ramping up container production activity at the end of last year and beginning of this year, inventories of new containers remain very low. What’s sitting on the ground roughly represents only two to three weeks’ supply.”

According to Freightwaves, the global container production is dominated to 80% by three Chinese companies, CIMC, DFIC and CXIC. Despite production being up since 2020, with estimates at around 6%-8% growth in container output in 2021, boxes just aren’t being built fast enough to ease the capacity crunch. Another reason according to Tim Page, interim CEO of CAI International is that the Chinese factories are not expanding production capacity. “There’s no indication from manufacturers that they’re going to increase container production,” he said. He also commented that there are reports on unusual situations now occurring at destination ports for Chinese cargo that ships in their hurry to turn around are “being forced to leave empty containers behind when they return to China,” he said continuing that “Several of our major customers report that virtually every ship leaving China and other export areas is fully loaded but because of the tight sailing schedules and the need to turn ships quickly, they are unable to wait for all the empty containers and they leave with 5%-8% fewer containers on the [backhaul] leg than they were on the [fronthaul] leg.”

All of these supply chain disruptions and unreasonable cost of logistics will in the mid-term speed up the transformation within supply chains towards more make to order and manufacturing close to demand. The average manufacturing costs in China and in Asia in general have moved closer to that of Europe and even EU with Chinese labor costs even at times exceeding those of lower cost European competitors. I have been writing about this trend for the past 5 years and the recent development has only reinforced this trend.

At the same time, China’s faster and stronger than expected recovery after the initial hit of the pandemic has pinpointed the necessity for European companies to seek solutions to enter the market. In doing so, one of the critical success factors not only due to import and market restrictions is the lead time of transport if manufacturing in Europe. As buyer’s expect faster delivery from order, European companies have few options but to set up manufacturing also within China to be able to compete on the market. In the past 3 years we have seen a growing trend of companies carefully looking for solutions to manufacture in Europe for the European market and now in China for the Chinese market. We have been helping a number of customers by building a supplementary supply chain in Asia and so helping them to enter the Asian market and this will grow in the future.

There are a few scenarios for the market directions in the new year 2022.

Scenario 3 – market prices even out with a softer landing towards lower levels, but still remaining clearly higher than pre-pandemic prices

In summary, the market indications imply that raw material prices will most likely continue on a high level until 2022 and transport congestion is also unlikely to be resolved before 2022. In 2022 we assume that the market would stabilize and with supply chain stock levels normalizing, the abnormal market price pressure would be reduced, and levels would normalize down but remain higher than prior to the pandemic. The stabilizing supply chain stocks should also reduce pressure on shipping, ending the worst in the disbalance in supply and demand within shipping.

To avert a crisis requires stable future market demand, which now looks strong globally, combined with market expectations not causing short selling or widely spread delays in ordering in anticipation of lowering prices. If such panic reactions can be avoided, we should be seeing calmer prices and a well managed retraction of transport prices and raw material surcharges.

My personal opinion is, at the time of writing, that scenario 3 looks most likely. And we definitely feel that the world deserves a moment of stability after a tumultuous soon two years. 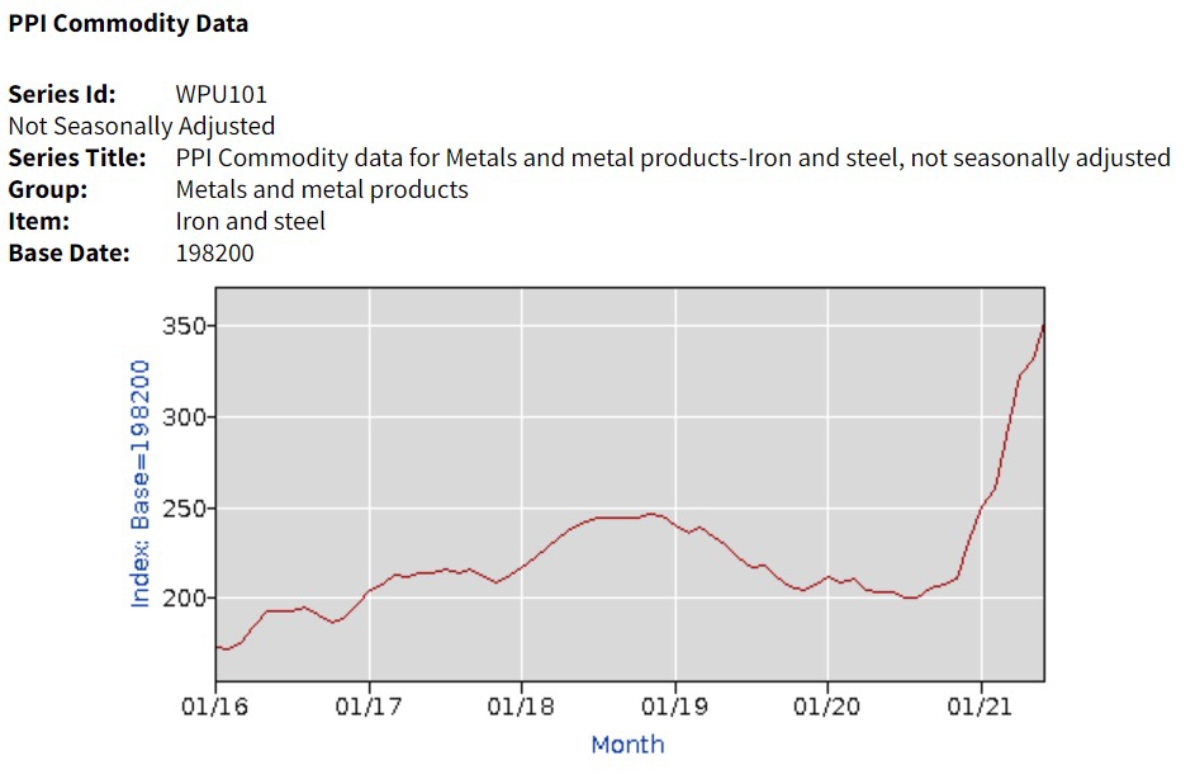